The Lecher-antenna is a measuring device with which vitality of tissues and organs can be measured. It determines the exact level of health or pathology of an internal organ or tissue.

Disease is a disruption of information. When such a disruption lingers for too long, it causes physical, visible complaints. These information disruptions can be measured with the Lecher-antenna. We will try to explain how this works. 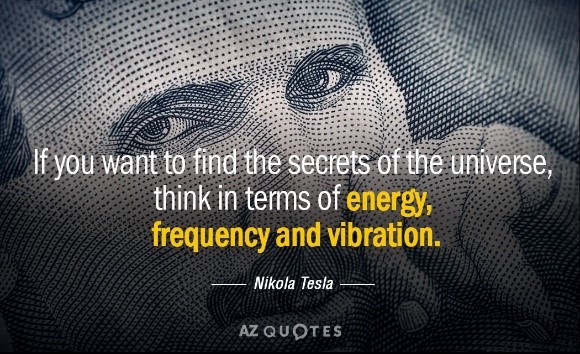 Quantum physicists say: Not matter, but quantum information is the building block of everything. Everything revolves around wave functions, vibrations and frequencies, because these contain quantum information. This is the information. Early in the 20th century, both Nikola Tesla and Albert Einstein were already aware of this. Albert Einstein stated: ‘Concerning matter, we have all been wrong. What we have called matter is energy, whose vibration has been so lowered as to be perceptible to the senses. There is no matter, there is only light and sound’.

More than a century later, it seems that now is the time to realize a paradigm shift in the Western view of medical science, based on recent (re)discoveries in quantum physics.

Professor William Tiller from sStanford University (also known from ‘What the Bleeb Do We Know’).

Current developments in quantum physics reveal more and more information and things -until recently not understood and inexplicable- can now be explained. This also applies to how the Lecher antenna works.

Scientists established that the cohesion and existence of all matter is due to energy, which is measurable as electromagnetic radiation. Every single cell in the body, every bacterium, virus or fungus, every group of cells and each “body” vibrates and has its own unique vibrational frequency. Whether it is a human body or, for example, the earth, it all vibrates at a different frequency. The Earth’s vibrational frequency is called the Schumann frequency, which is 7.83 Hz, or slightly higher.

Each part of the body has its own frequency, and this gets very detailed. There’s not only a frequency of the liver itself, but also of all parts of the liver such as the Kupffer cells, bile capillaries, the hormones involved, etcetera. Besides the vibrational frequencies of the physical body, meridians, emotions, energy flows, chakras, etcetera, all have their own unique frequency. All these different frequencies are a form of electromagnetic radiation and can be measured with the Lecher-antenna. In the past 30 years, an extended list of frequencies has been drawn up, aided by a whole team of veterinarians, holistic therapists and building biologists.

The Lecher-antenna consists of an oblong epoxy glass fibre sheet with the parallel Lecher lines, a measurement scale (ruler with hatch marks), and a slider with a copper wire and two handlebars. This slider is used to adjust to different wavelengths (frequencies). Within one of the handlebars there is a polarised magnetic rod. This rod is used to measure the energy’s positive and negative polarisation, both always present in each organ, tissue or cell. The ratio of this positive and negative energy is important.

The Lecher-antenna’s ruler with its hatch marks can be compared to the neck of a guitar. By placing your finger at a certain height on one of the strings, you determine the tone. The guitar body resonates with the vibration and produces sound. It is the same when adjusting the slider on the ruler: by placing the slider at a specific point, you determine the wavelength – a specific frequency – you want to measure. The body of the person that holds the Lecher-antenna functions as the body of a guitar: the resonance box.

Similar to moving your fingers and strum the strings when playing the guitar to make music, nothing will happen when you just hold the Lecher- antenna. A potential difference is required in order to be able to measure the energy value. To generate this potential difference, you will have to move the Lecher-antenna. This compares to the operation of a dynamo.

A magnetic rod with a positive pole (red, short side), and a negative pole (blue, long side) is placed inside one of the hollow handles of the Lecher-antenna (with only the tip sticking out).

When ‘setting up’ the Lecher-antenna (closing your fingers around the handlebars with a slight tension), you create with your body a closed electrical circuit between your two hands. By moving the Lecher-antenna in an energy field, you generate a microcurrent if the Lecher antenna recognizes the wavelength. This minuscule electrical current goes through the forearm muscles, which makes them contract. The nervous system can be conditioned by training your perception -by unconscious contractions of your forearm muscles- in response to the weak signals from the handlebars of the Lecher-antenna.

Your own body is the point of reference for the energy you are going to measure. You are basically calibrating and comparing. This is why it is very important to create a closed circuit (‘setting up’ by closing the fingers around the handlebars) outside the energy field of the object you want to measure, and only then move through its energy field whilst maintaining the closed circuit. By continuing to move, it generates a continuous microcurrent until our resonance box is filled up with that particular frequency. When ‘full’, the Lecher antenna falls over and can no longer be put in the upright position without ‘setting up’ again. The stronger the energy, the sooner the sound box is filled, and the Lecher-antenna will therefore fall over.

You can compare this to moving an empty cup back and forth through the stream of water from a tap: when there is a full stream of water, your cup is full after moving once, twice or 3 times through it. If there is only a trickle, you have to move your cup through it many times before it is full. You count the number of times you had to move through the energy field (number of ‘strokes’) before your Lecher-antenna falls over and this number represents the strength of that particular wavelength.

The ideal ratio for measuring energy with the Lecher -antenna is 19 strokes for negative energy and 12 strokes for positive energy (19:12 ≈ 1.6). So, it is a relatively weak energy. A body or energy system always strives for homeostasis and balance. When an organ is out of balance, at first the energy strengthens in an attempt to restore balance; the organ is working hard. Then you get, for example, 1, 2 or 3 strokes. When the imbalance lasts for a longer period of time, the energy of the organ/ energy system gets exhausted and you get more than 20 strokes. In other words, when adjusted to the frequency of a certain organ, the Lecher-antenna with its magnetic rod measures the energy strength of that organ. The extent to which the energy strength deviates from the standard, the Phi ratio, is indicative for this organ’s energy imbalance.

Why is our body such a good resonance box? 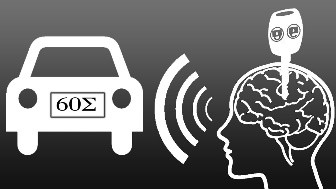 First, by way of illustration, a simple test you can do with your remote car key. Find the maximum distance away from your car at which the remote key still works to unlock it. If you then repeat this test while holding the key against your head, you will find that the key works at a much larger distance, the signal has been amplified. Your head becomes an antenna. Or: when you hold the antenna of a radio or old-fashioned tv with your hands, the signal is amplified as well, and improves reception.

Humans, animals and plants are all electromagnetic creatures, which consist mainly of water, bacteria and quantum information. 70% of our body weight is water but 99% of our molecules are water molecules. Water determines all biological processes within the body and water plays the key role in our body’s internal communication network. Water is a broadband absorber, like a radio receiver, for electromagnetic frequencies and quantum information.

Water and light are essential for life on earth: the electromagnetic radiation spectrum (= light) is the source of quantum information and through water this information gets materialised and shaped. Understanding the way water is structured and the way it carries information, may well be the missing link in modern medicine. We believe that the internal communication within the body happens in the Ultraviolet (yang) and Infrared (yin) spectrum. Water acts like a crystal, like an absorber as well as a transmitter of quantum information. Since 99% of our body molecules are water molecules, our body therefore is the ideal resonance box.

Brief explanation of the electromagnetic spectrum

We use Unihedron’s Full Spectrum Poster. You can find this poster on their website www.unihedron.com.

The electromagnetic spectrum is seen on this poster from long wavelength at the bottom, to short wavelength at the top, in ‘band widths’ or octaves. The long wavelengths are thousands of kilometres long, the ultrashort wavelengths are nanometres and picometres. These increasingly shortening wavelengths provide radio waves, microwaves, terahertz waves, infrared, visible light, UV radiation, X-Rays and gamma radiation. Per octave or bandwidth, the wavelength halves and the frequency doubles. When there is interference on one bandwidth, its effect resonates to all the above bandwidths. This is called the ‘overtone effect’. 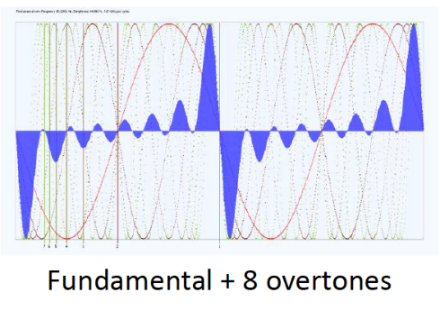 These principles of ‘producing a harmonic series’ and overtones are exactly the same in the electromagnetic spectrum. The fundamental tone with its eight overtones (eight times the same tone in eight octaves lying above) is called a ‘harmonic’. When there is interference at some point in the EM-spectrum, this resonates through the rest of the spectrum, mainly to the octaves lying above, from long wavelength to short wavelength. If, for example, one harmonic disappears, immediately a new range is formed. Electromagnetic waves contain up to 50 or even 60 harmonics. Different frequencies may interfere with one another and produce a new wave, either harmonic or not…

There is at this time insufficient knowledge of interference and its possible effects on our body. Radiation research disregards this and mainly focuses on thermal effects. Our entire system has gotten used to a certain electromagnetic spectrum that has existed for hundreds of thousands of years. Over the past 10 or 20 years, this has changed with incredible speed, without realising what negative influences it may have on the water structure in our body, in our environment and worldwide, on all of earth’s water.

Why do we need the body for measuring and can’t it be done by a computer?

Producing a harmonic series (octaves) is of major importance in order to be able to measure the right frequencies. A computer is not (yet) able to do so. Our body, which consists of 99% water, is one of the few media capable of bridging the octaves from the Lecher-antenna (around 2-16 MHz, ‘radio waves’) to the frequencies on which the body communicates (terahertz, infrared and ultraviolet spectrum).

As mentioned before, we think that the communication within the body is at the level of the infrared and ultraviolet spectrum, the teraherz range. In order to be able to measure these higher frequencies we need our body as an intermediary.

Looking at the EM poster, you’ll see that 3 MHz is about 28 octaves away from the visible light range. Just above the visible light range, in the UV spectrum, the Yang communication takes place. Just below the visible light range, in the infrared spectrum, the Yin communication takes place. Somehow, we must bridge 26-30 octaves. Water is a broadband absorber, the radio receiver and transmitter of electromagnetic waves and quantum information. Therefore, water is an extremely suitable medium for bridging these octaves. The fact that we are for 99% made up of water, hopefully explains why our body – opposed to a computer – is suitable to measure this quantum information with the Lecher-antenna.